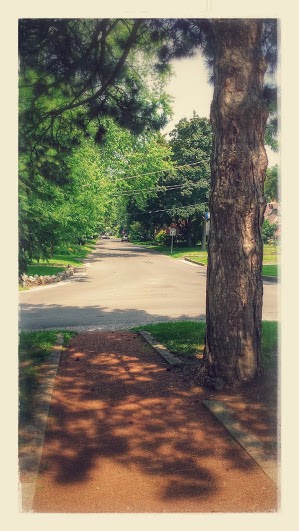 I get to run in the Kingsway.  For those of you in the know, this is a nice neighbourhood...a very nice neighbourhood.  I know people who live 'near the Kingsway' who lie and say they do.  It's a heavily treed area of mostly single family homes on large lots.  The meandering roads make for some very enjoyable running.

Homes in the Kingsway can be broken down into three general categories. First there are the Ultra large Real Mansions.  Most back onto ravine lots and a few even but up to the exclusive St. George Golf Club.  These are at the top of the food chain and are either on the actual Kingsway road itself or nearby.  I swear nobody lives in these places...the same couple of nice vehicles are always in the same places on the driveways (don't these people like parking in their heated, underground 6 car plus garages??).  Daydream: "That's the kind of house I'll buy when I win the Lotto Max".

The next level down are the 'Regular Mansions'.  These are still way bigger than the homes most people live in but the lots are smaller and the 'Big' houses take up much more of the lot.  These are the homes that the 'Middle Class' live in.  That'd be true if the average income in Canada was $1,000,000 per year.  Nice houses, nice cars...really nice roads with sidewalks cleared soon after snowfalls.  Great for winter running.

Finally are the 'Regular Homes'.  Smaller on smaller lots but still over $1 Million.  Whew...not much in the way of Starter Homes in and around the Kingsway. These homes have immaculately maintained front yards with owners who do the work themselves.  On even my early morning runs I often see the home owners and they often take note and wave a friendly greeting.  Nice.  The photo above is of one of the streets of Regular Homes.

I've lived and run in some nice places...the Beach at Wasaga Beach is a high light...but the meandering roads in my current running neighbourhood are some of the nicest roads I've run on.

Until next time...
ThatRunninGuy
at August 05, 2014
Email ThisBlogThis!Share to TwitterShare to FacebookShare to Pinterest
Labels: Running
Location: Etobicoke, Toronto, ON, Canada