I blame it on Navin.  In a nice way of course.

Back in December at Reggae Marathon he not only burned up the full Marathon in a time nearly 20 minutes under his target time (we barely made it back to catch his finish) but he achieved the runner's dream of running a negative split for the second half of the race.

The negative split is when you run the second half of the race faster than the first half.  Yes, this is as hard as it sounds, especially in an event as long as the 26.3 miles of a Marathon and and really challenging in a warm weather run such as Reggae Marathon.  And Navin did it with a smile on his face and with barely a sweat. He even had enough energy to walk the mile along the beach back to our hotel chatting all the way.  A machine! 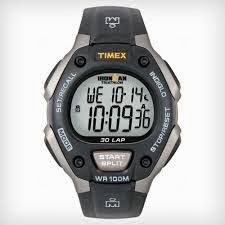 So that's the target for my first race this year, the Sporting Life 10K on May 11 in Toronto:  run the second half faster than the first. It's something I routinely did back in the peak of my 10K racing days. My trusty Timex Ironman watch tracked the 5 km split quite nicely.  I realize this is 'Old School' what with everyone using Garmin's with heart monitors, but I like the I recently upgraded to a brand new Ironman watch.  Back then it was in the Q 107/Coors Lite 10K running series that ran every summer for years.  The irony of a beer company sponsoring a running series was not lost on us...unfortunately given the liquor laws of Ontario there was no 'Cold One' waiting for us at the finish.  But I digress...

If you're interested in how to run a negative split, check out this article from Runner's World:  The benefits of a Negative Split.

I'm totally focused on "The Negative" now.  Thanks Navin :)