Running in the snow in Toronto 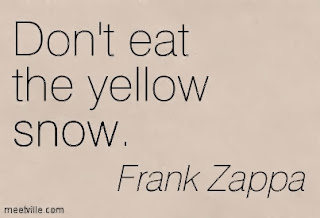 A few years ago when living in Wasaga Beach running on hard packed snow was normal in winter. It was actually safer than it sounds:  Wasaga Beach used sand on the roads and this provided some decent traction. And combined with a lack of salt, there was not much ice.  On many early morning runs after the frequent snowfalls making tracks through freshly fallen snow was truly special.

Fast forward a couple of years to this winter in Toronto!  Who ordered the snow!

One of the 'nice' things about winter in Toronto is the lack of snow.  At least that was how it was up until this year.  We've had frequent snowfalls and with below freezing temperatures it's been sticking around.  I've had to re-learn snow running techniques from Wasaga Beach!  Normally that wouldn't have been too bad but the real challenge has been the ice.  Snow control in Toronto is all about the salt.  Regular salt, sodium chrloride makes things sloppy and dirty when temperatures are near freezing.  As the temperature drops into the deep freeze levels...and we've had that too this winter...the salt stops working and the slush turns to ice.  And that's no fun!

With winter officially only 12 days old now it looks to be 'interesting' running ahead for the next few months. So far no slips or falls but the winter is early.  Stay tuned...

Until next time...
ThatRunninGuy
at December 31, 2013
Email ThisBlogThis!Share to TwitterShare to FacebookShare to Pinterest
Labels: Running, running in the snow, winter running
Location: Etobicoke, Toronto, ON, Canada