So as 2013 comes to an end I've had the opportunity to reflect back on a year of running.  It began back in the cold, dark months of January with tentative steps as the first stage of running after sustaining broken bones in my right foot.

It wasn't pretty.  I'd gained a few pounds after months of less intense physical activity and my leg muscles cried in agony as I pushed beyond just fast walking.  But I persevered and by early spring I was running regularly. A relatively mild and snow-free winter in Toronto helped a lot to get back into the groove.

Then my son Court invited to run with him in the Sporting Life 10K in early May.  I was pretty sure I'd be slow as molasses but it was the first big running test.  Heavier than normal I pounded down Yonge Street and even had a little something left for the final sprint-to-the finish.  It felt good.

I didn't race again until the Reggae Marathon 10K in Negril, Jamaica in early December.  After all these years of running and racing, I'd come full circle:  I spent much of the 1980's and 1990's running many 10 K races in Toronto . Nice! 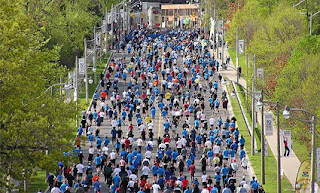 On that early spring morning I'll join 25,000+ other runners heading straight down Yonge Street in Toronto.  It's mostly all downhill with a flat finish. That early in the year should produce ideal cool racing conditions.  I expect a relaxed yet fast result.

Training for the Sporting Life 10Kwill include lots of speed work at the local high school track this spring along with longer runs along the Humber River trails.  I may even include some water running along with some spinning at a local gym.  Yes it's all about the running but I'll mix it up a bit this year.

As we move into the depths of Winter in Toronto, the beacon of light that is the the Sporting Life 10 K in May will be the bright goal.