Running DOES solve everything 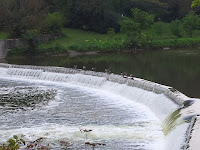 What was I thinking in my last blog post? (Running doesn't solve everything).  Running does solve everything.  On every run I've been on I've been able to 'solve all the problems of the universe' multiple times. If only I could remember the solutions after I finished...
Getting 'into the zone' where all the problems of the world disappear is magical.  Some days it happens quickly on others it only happens during the final kilometre.  I've always experienced it though no matter the run.

So running does solve everything...these are my top 5:
Until next time...
ThatRunninGuy
at September 03, 2013
Email ThisBlogThis!Share to TwitterShare to FacebookShare to Pinterest
Labels: Humber River, inspiration, motivation, Running
Location: Etobicoke, Toronto, ON, Canada