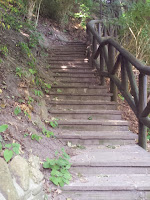 I've been running 30+ years now.  Back in the day I could eat what I wanted to, drink what I wanted to yet could keep the weight and belly fat off by just going for a run.  Ahh...the good old days.  Fast forward to my mid-50's and that model has mysteriously gone out the window.  I guess if I paid enough attention to my changed metabolism I wouldn't be this stressed.  But you know me, I just charge along stumbling and fumbling along the way.  Running of course!

So, running really doesn't solve everything. But running sure does makes life so much better.
Until next time...
ThatRunninGuy