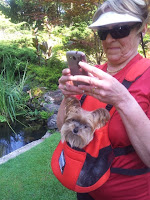 She was an active skiier and tennis player.  In an earlier life she enjoyed sailboating.  Over the past few years however she has become less active.  Then this summer, the 'Eureka' moment:  she took up walking!

Like all such decisions this happened after a major life changing experience:  she contracted pneumonia!  This nasty bout kept her bedridden for nearly 3 weeks on heavy anti-biotics and a liquid diet.  It wasn't much fun.  But like Rip Van Winkle, when she 'awoke', she was hungry for something new.

And a walker was born...

Yes, Sally has taken up walking.  As you know we live beside the Humber River in Central Etobicoke and have miles of paved walking trails just steps from our house.  When the non paved trails deeper into the woods are included, the choices of cycling, running and of course walking are virtually endless.  Most of the trail is tree covered and the noise of the city...well, there is no city noise to be heard.  It's like being deep in the forest. 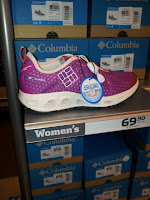 And like any newbie, all she talks about now is walking:  blow-by-blow of each walk, the benefits of polypropylene and of course shoes.  Her first few walks were in a pair of fashion shoes...not good...led to early case of shin splints.  Her second pair were an old pair of running shoes.  She didn't like how clunky and 'wedgie' those were.

After trying on a number of shoes, she settled on a pair of walking shoes from Columbia.  'Heaven'.  They have a lot of support with a very natural feel.  Not too much rise so they mimic a very natural and comfortable walking stride.  Sally loves them.  Of course once bitten, she is now eager to try out other pairs.  I see a new favourite store in her future:  Running Room!  For her birthday recently she asked for and got a Gift Certificate for Running Room and it's burning a hole in her purse.

Sally was determined to keep it simple and non-competitive.  Then she found the Map My Walk App for her Galaxy 3 Smartphone!  Now when she hears the voice, 'Signal lost' she walks faster to pick up the GPS signal again. 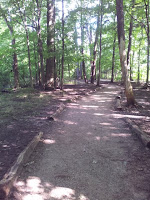 I join Sally and Tia most weekends now to 'go for a walk'.  The most recent milestone was a 7.5 K last weekend on a particularly hot and sunny Sunday morning.  Thankfully the trees overhead provided nice shade for most of the walk.  It actually began as a 2.5 mile walk but the challenge of the longer distance got the better of us and we ended up doing 7.5 K.  Sally was in some pain the next day...thank you Voltarin (this stuff really works).

She will never transition to running...one crazy in the family is enough...but she loves walking every day.  Now if only we can figure out where to hang our respective workout clothes...