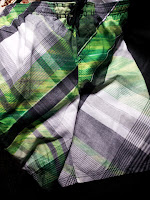 I left it too late and paid full price.  But it's a nice bathing suit don't you think?

Since spring of this year Sally has been 'gently reminding me' to buy a new bathing suit.  The last pair I picked up at an end-of-season sale a couple of years ago and it was dead.  Sally demanded they be 'donated to garbage' and they were!  I procrastinated.  That's waaaay better than admitting that I ignored her.

She went out of her way to shop on my behalf telling me repeatedly throughout the summer of the stores that had large selections of bathing suits on sale.  Still put it off.  I was convinced I would still be able to have my choice and get a deal.

Then last week she came home with the great news that Wal Mart still had bathing suits...for $9!  Ah, ha...that's my price!  Off we went.  Oh yes, I dragged her (asked her nicely) along to come shopping with me for what was surely to be a quick in-and-out to pick up a couple of pairs and still have change from a $20.

Alas it was not to be.  They had limited selection first of all...what's with XXXL sizes?  Oh I forgot who their target customer is!  Then there was the fit.  Or lack thereof.  I tried on the first pair and even though I am not a fashionista, even I couldn't believe how badly they fit. So foot cast back on and off to Mark's Wear House.

Why I thought Mark's Wearhouse would have bathing suits is beyond me.  Sally was thankfully noticeably quiet and indulged my fantasy.  It was indeed a quick in-and-out once I noted all the winter inventory.

In exasperation we headed to the Sport Mart.  Surely they would have bathing suits.

And they did.  A grand total of 10 men's bathing suits hiding on a single end rack at the back of the store.  Brand names though and my size.

Once more into the fitting room, removed my foot cast and tried a couple of pairs on all the while desperately looking for the sale sticker.  It was not to be.

So with a nod to Sally for putting up with my silliness, I hastily paid for the new Reggae Marathon bathing suit and exited the store.  "$56...will that be cash, credit or debit" asked the perky clerk.  "Full price" I muttered to myself.  But hey, I'll look great on the beach in Negril at Reggae Marathon!

Follow me on Facebook at Run for Heart.  Race for 2012: Reggae Marathon, December 1.
at November 06, 2012
Email ThisBlogThis!Share to TwitterShare to FacebookShare to Pinterest
Labels: Living, Running