It was an emotional decision to sell our home in Wasaga Beach and move back to Toronto. Beautiful home designed and built just as we wanted it. Sitting on our back deck on a cloudless summer day enjoying a cold one...or two...was priceless.  And as a runner the miles of flat running along the shore of Georgian Bay virtually year round was a major attraction.
The downside was the time apart.  Working in Toronto during the week and travelling to Wasaga each weekend was a chore. We used Skype, cell phone, email, text and phone calls to keep in touch during the week. But eventually it took it's toll.  And is often the case it was a simple statement from a chance meeting that Sally had one day with a lady walking her dog that did it:  "Why are you guys living apart?...Life's too short for that".
Done!
So now we live in a leafy area of central Etobicoke literally steps from the Humber River.  Here's a photo of the creek that runs down one of the trails I now have the fortune to run along each day: 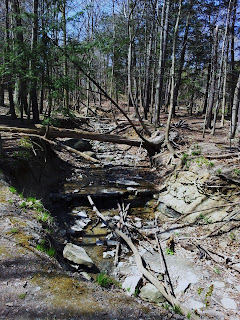 So was it a fair trade?  Sally and I think so.  And so does Tia who now enjoys chasing all the squirrels that inhabit the woods just outside our back door.
It's nice to be home. And a final note:  Sally never did run into that lady and her dog again.
Until next time...
ThatRunninGuy
Note:  Photo and video shot with the Samsung Galaxy Note.
at April 16, 2012
Email ThisBlogThis!Share to TwitterShare to FacebookShare to Pinterest
Labels: Running