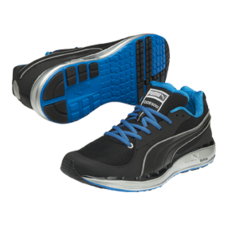 And then there were 2.  Sally texted me at work yesterday to let me know that the second pair of Puma Faas running shoes I ordered had arrived.  I received the first pair, the Faas 300 running shoes last week and had them out for a couple of runs on the weekend.  These are the Faas 500 running shoes that will be living alongside them.  They replace the Red Faas 500's that were retired after a very, very long run (pardon the pun).

My first run in these will have to wait until the weekend.  First, the weather conditions are miserable today and tomorrow with a nasty rain and snow combination and I don't want the first run to be in these sloppy conditions.  I know, I know...

The second reason is better;  resting to aid recovery of a muscle injury in my left leg.  All should be fine by the weekend.

If my previous experience in Puma's provides any indication, I'm expecting a super ride with both of these new ones.  I think the first long run on the weekend will be on the trails alongside the Humber River.  Next will be new running wear to colour coordinate with the shoes.  So vain!

Until next time...
That RunninGuy