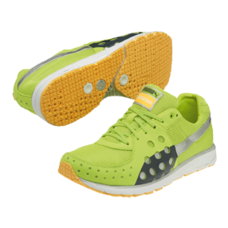 Christmas 2011 was a mad blur.  We rushed to have the new apartment in Toronto set up enough so that we could enjoy our first Christmas in the new place.  We had a family get-together to enjoy on Boxing Day.  We celebrated New Year's Eve with friends in St. Catharine at his son's wedding.  Oh, and we unpacked boxes and boxes and boxes...we were the 'Recycling Royals' over the Christmas break.

But even with all that activity, the real excitement for me was placing  my order online with Puma for new running shoes.  Two pairs actually, the Faas 300 and 250 models.  Both are lighter and even flashier than the Puma Faas 500 model I spent much of last year running in. Sally asked me if they were bright enough:  "they are never bright enough" I joked.  She's thrilled the first pair arrived since I've bugged her nearly day with the question, "has the package from Puma arrived yet?"  And yes, the bright red pair of extremely well-worn Puma Faas 500 running shoes have finally and deservingly been retired.

"I just love 'em!".   Here we are 'opening my present' shortly after the box from Puma arrived:

I've already been out in them for a couple of runs.  More about that later.

at January 09, 2012
Email ThisBlogThis!Share to TwitterShare to FacebookShare to Pinterest
Labels: Running