But that wasn't all at Reggae Marathon.  Once again I got to meet some interesting people.  Runners all, they heard about Reggae Marathon from friends or Social Media and were inspiried to make their own running story.  I met Alex from Cologne, Germany in the Reggae Marathon Race Kit pickup line on Thursday afternoon.  He was in Negril to full his dream: Fulfilling a Dream.

And then of course are the images from Negril captured in hotos.  Here are a few, each one special: 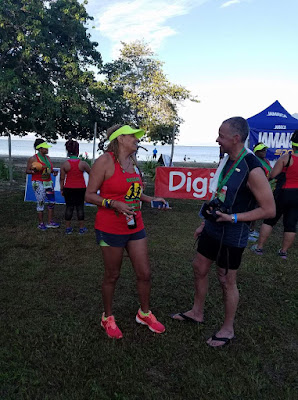 Rocking the Reggae Marathon and Reggae Runnerz colours, the indefatiguable Lisa Laws. Although we only enjoyed a few moments after the race, it was nick to catch up with the lady responsible for 450+ runners from the US who make the annual pilgrimage to Reggae Marathon every year.  If you want to join them, head to their website, Reggae Runnerz. 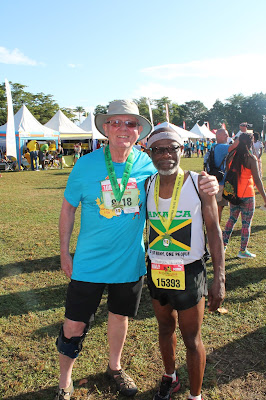 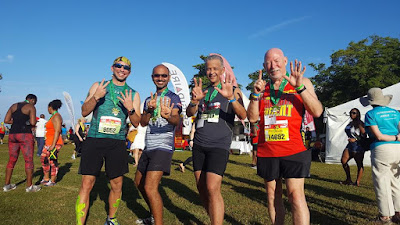 What began with Navin stalking me at Reggae Marathon a few years ago has led to the '4 Amigos', Larry, Navin, me and Dan who now have 28 Reggae Marathon events between us. Larry really had done 6 Reggae Marathons not the 7 his fingures indicate.  He said he was nervous but I think he was thinking about Reggae Marathon 2017 on December 2. 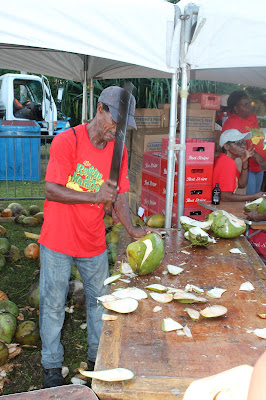 Men with large, sharp machettes chopping coconuts for each runner after Reggae Marathon.  Coconut water is a great natural electrolyte replacement fluid but half of the fun is watching these guys wield their machettes.
That's the Reggae Marathon Experience.  Deeply personal, addictive and made up of special unique momemts.  It keeps me coming back year after year.
Until next time...
ThatRunninGuy