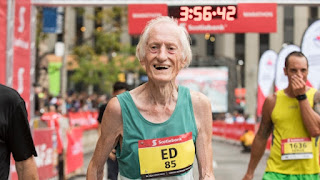 That's the response Ed Whitlock gave after smashing records at the recent Scotiabank Toronto Waterfront Marathon.  Oh, did I forget to mention:  Ed's 85 years old!  If he and I had run only the Half Marathon he'd have outpaced me by over 15 minutes.  This man can run!

As a runner it's all about Personal Bests...we all say we don't compete with other runners. We all talk a blue streak about how it's important to 'run your own race'.  But buried deep down is that competitive itch:  'I want to beat that guy in front of me'.  We mid-pack runners may not talk about it much but it's there. Watching Ed Whitlock smash world records in his mid-80's is inspiring and motivating:  "I want to run like that when I'm 85!".  Truth be told, I just want to still be moving upright when I'm that age.