What I really think about running 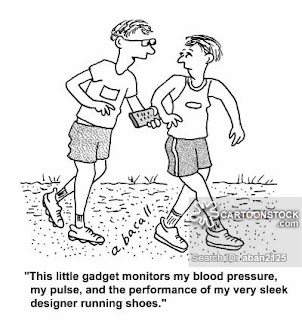 What do I really thing about running?  And about runners?  Well...

Running is a pretty boring and monotonous sport. At it's heart:  Left, right, left, right...repeat until done.  Humans have been running since, well, since before we were human.  The first thing we learn as babies after we've learned to walk is to ... run! Baring a few exceptions, all of us can run.  A few of us do it for sport.  And to hear us talk about it!!  For such a simple sport, we sure have a lot of technology to talk about.  From what type of running shoes to wear to 'performance' fabrics and clothing to the technology that allows us to monitor our every step...and broadcast it to the world (or at least our friends on Facebook).  For such a simple sport, we runners sure talk about it a lot.

At first glance, running would seem to be a solitary activity.  Who of us hasn't gone out on that early morning, pre-dawn run with the explicit goal of not seeing any other people, especially other runners. It can get masochistic: How early to get up to beat other early morning runners.  OK, maybe that's just me.  Running may be an individual activity but it is a social one.  Runners talk about training runs, pacing, breathing, upcoming races, personal bests. And we talk about these nuances to anybody who'll listen.  If you're married, take a moment to thank your spouse.

Social Media has helped spread the word about running.  Back in the day I went to races as a mostly solitary experience.  Yes there were lots of other runners and occassionally during a race a few of us on a similar pace chatted.  But mostly I trained alone and ran solo.  That changed when Facebook entered our lives. I met all of my current running friends online on Facebook.  The tentative virtual conversations were the first steps as we talked about running and planned our first meet up in Jamaica at Reggae Marathon.  That was seven years ago. The group has expanded with new friends joining us online and in Negril but one thing remains the same:  The highlight of our running year is meeting up at Reggae Marathon each December.  Some winter mornings when it's cold and the bed is warm, it's the only thing that gets me up and out the door.  I don't want to disappoint my running friends.

What do I really think about runners? We're storytellers.  We can take the most mundane experience...how we stopped to re-tie our shoelaces for example...and turn it into a story.  One that we tell endless and that gets embellished with each re-telling.  And maybe non-runners won't get it but that's their loss.

at May 17, 2016
Email ThisBlogThis!Share to TwitterShare to FacebookShare to Pinterest
Labels: Running
Location: Toronto, ON, Canada