As you know I like water.  From the sandy beaches in Jamaica where I grew up, to mountain lakes in Western Canada I visited with the kids to the mighty Humber River that rushes past our home where we live now.  It's all about moving water.

I run through very well developed residential and commercial areas.  It's not tough to find rivers and streams but it is a challenge to run alongside them.  This little gem of a creek quietly goes about it's business.  Just north of this location it passes through a golf course and just south it runs through heavily treed backyards...I envy those home owners who get to enjoy their own private creek.

At the spot I took this photograph, it runs under the major intersection of Islington Avenue and Dundas Street West.  If you're driving on Dundas Street you'll miss it for sure;  Southbound on Islington you may catch a glimpse.  While running though it's possible to slip off Islington Avenue and pick up a paved trail that runs along the creek for a hundred metres or so.  Lots of green along this short stretch that with the sound of the water over the rocks almost completely drowns out the road noise mere metres away. 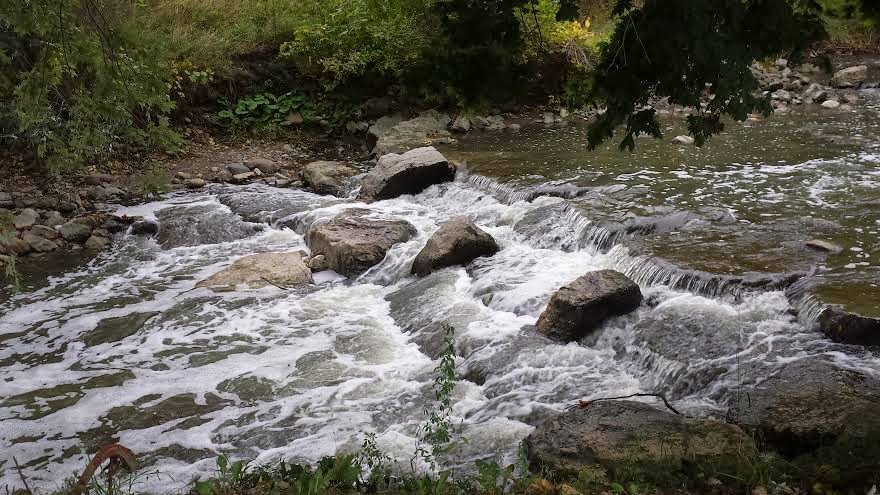 It's not much but it is enough.  Especially buried deep within the City.  I try to run by this spot at least once a week.

Until next time...
ThatRunninGuy
at October 28, 2014
Email ThisBlogThis!Share to TwitterShare to FacebookShare to Pinterest
Labels: Running
Location: Etobicoke, Toronto, ON, Canada