I ran topless at Reggae Marathon in 2011.  Nervous at first but in the pitch black of the pre-dawn after the 5:15 am start it seemed safe enough.  And it was cool.  I mean refreshing.

Since my foot injury in September I've been swimming and running in the local pool. Topless of course.  This time no staring or shout-outs...unless the admiring glances from the 'older ladies' means anything.  Not that I notice of course...it's 6 am, I'm barely awake and it's all business.

Running in the pool seems easier than running on land at first blush.  For sure it is certainly easier on the knees and feet than pounding the pavement.  But after the last few weeks I can tell you that running in the pool is hard work!  And you don't know you're sweating!

My general workout goes like this:
For the running I've used a boogie board to give me some buoyancy.  I tried a flotation belt last week and was able to simulate the full running-on-land motion.  I think I'll continue with the flotation belt...it's better for simulating the full running form.  The biggest challenge though is boredom. It's tough not to watch the clock ... time seems to go oh so slowly when I'm basically treading water for 40 minutes.
If like me you're a die-hard runner recovering from injury (or if you just want a total body workout), I'd recommend pool running.  Here are a couple of good sites to check out:
I can't promise I'll run topless at Reggae Marathon again this December.  But to paraphrase a phrase from my Reggae Marathon friend, Bob Moore, "Once you go, you know".  And you just never know what will happen the morning of December 1 in Negril.

at October 30, 2012 No comments:
Email ThisBlogThis!Share to TwitterShare to FacebookShare to Pinterest
Labels: Living, Running

The rain held off until the last paintball game.  Even that wasn't enough to stop the group of 10 paintballers who came out to Wasaga Beach Paintball last Saturday for the 4th Annual Paint Attack fund raising event for Run for Heart.

As you may know, Run for Heart is the name Sally and I came up with for our annual fund raising efforts for the Heart & Stroke Foundation.  We've lost Mother, Father and Brother to strokes and heart disease and it's our way of giving back.  Over the past 3 years we've raised $10,000.  Thank you so very much for your support.  For 2012, our goal is $2,000 and with the efforts of the 10 warriors who came out last Saturday we raised $800.  We are blessed with so much sincere support! (Donations accepted here:  Run for Heart)

Hitting the $2,000 goal in 2012 will be a little more challenging since I've been laid up with the broken bones in my right foot (Is this the day I no longer run?) Four weeks in the foot cast so far with a couple to go...I missed the Scotiabank Toronto Waterfront 1/2 Marathon in October which was one of my key fund raising events.  I've been swimming and running in the local pool to stay in shape and hope to be back running by mid-November.  That's only 2 weeks before Reggae Marathon but I'm determined to finish the Reggae Marathon 10K to get to the $2,000 goal.

Back to the paintball.  Unfortunately I wasn't able to head out to the playing fields last Saturday with the Paint Attack Group.  They didn't get to 'light me up' as they've delightfully done in the past. I thought about it though but common sense (and Sally) kept me from doing further damage to my foot.  As the chef for the day, I cooked up a storm:  burgers and sausages for the 10 warriors who included Andrew, Court, Holden, Carleigh, Amy, Nicole, Mark, Michael, Cuarai and Steve.

In this after photo, I can tell you that a few of the smiles were forced.  After 4 hours of playing paintball in the 70 acres of rugged playing fields at Wasaga Beach Paintball they were...a wee bit tired.  And soaked.  A torrential downpour swept in for their last game. Hot chocolate would have been appropriate...next year.

At the end of the day, great fun had by all in this 4th Annual Paint Attack.  And already enthusiasm for 2013 has already.  Now if only I can stay healthy.

If you'd like to make a secure credit card donation to the Heart & Stroke Foundation, go to this link:  Run for Heart.  Thank you in advance for your support and donation.

Until next time...
ThatRunninGuy AKA "Chester"
++++++
Follow me on Facebook at Run for Heart.
Race for 2012: Reggae Marathon, December 1
at October 23, 2012 No comments:
Email ThisBlogThis!Share to TwitterShare to FacebookShare to Pinterest
Labels: Living, Running

Hmmm...maybe this foot cast isn't so bad after all

A little old lady offered me her seat on the subway last week.  Then a younger man did the same yesterday.  Wow...people really are nice in Toronto. Thanks for the offer.  But it got me thinking...what if I keep the walking cast on my foot for my daily commute after the injury heals?

What?  Did I just say that out loud?

I'm on the subway and bus each day for a total of about 60 minutes each day.  Yes it's crowded, we are usually packed in like sardines and some days the A/C doesn't work (never have to worry about it being too hot even in the winter!).  For a daily commute in the Greater Toronto Area, it's pretty good and even though I still love driving, the TTC is the best way to get to and from work.

But most day's I'd kill for a seat.  And not just any seat...an aisle seat is premium.  And no middle seats.  Those were not meant for normal size humans so it is never possible to be comfortable squashed on both sides by other commuters.

But ... I'll be out of the cast by the end of October (I hope) but if I strap the foot cast back on, I wonder if I can get an upgrade when I fly down to Montego Bay for Reggae Marathon this year?

Until next time...
ThatRunninGuy AKA "Chester"

++++++
Follow me on Facebook at Run for Heart.  Race for 2012: Reggae Marathon, December 1.
at October 16, 2012 No comments:
Email ThisBlogThis!Share to TwitterShare to FacebookShare to Pinterest
Labels: Living, Running

The X Ray was very difficult to look at.  Two of them actually.  You see, he had broken both legs clean through mid-way down the femurs in a toboggan accident.  That was over 18 years ago and it happened to Andrew.

I can still remember the evening.  On my way home from work, told that Andrew was in emergency with broken bones. Dam...we were 2 weeks away from a planned vacation.  Maybe we could get him in a cast and on the plane.

It was not to be.

I got to the hospital and rushed to the emergency ward.  Things were eerily quiet around Andrew but he was scared.  I'll never forget that face.  There he was in bed with both legs inverted.  He was in pain but he was gritting his teeth.

The doctor took us to the X Ray screen and showed us the results:  both legs broken clean through.  What? He would have to spend 6 weeks in traction with his legs inverted then a further 6 weeks in full leg casts.  How?

He was admitted later that evening and his brother's came to visit.  They were scared as hell.  I know each had his private feelings but Court, his twin brother was really affected.  And you know brothers...love/hate on the best day.  This was not one of the best days.  When time came to leave the hospital for the evening they did not want to leave.  I believe some gentle force was required.

I did not leave.  I spent that first night with Andrew in the room with him not sleeping on the only chair in the room.  The pain of seeing him in pain was unbearable.  "Please God, break my legs and fix his...anything to take his pain away".  It was a long night.

Questions, questions:  would he ever walk again?  Play baseball, the game he loved.  Oh, and let's not forget school...

I am reminded of all this as I deal with the bone fractures I suffered recently (Is this the day I no longer run).  Nowhere near as severe as Andrew suffered those years ago.  What keeps me going is knowing that bones do knit, injuries do mend and the memory fades away.  I keep that top-of-mind.

Andrew's bones did mend.  Even stronger than ever.  He went on to play rep baseball throughout grade school, high school and into university where he and his twin brother Court won the Provincial Championship while at Western.  Additionally he led the Iona Football team for 4 years as the starting Quarterback.  The highlight for me was watching Andrew, Court and Holden all playing high school football together.

Oh and school...his teachers and friends rallied around and made sure he kept up with his work and not spend his days idly watching television.  He graduated last year from DeGroote with an MBA.

Those 6 weeks in the hospital were tough.  We visited him every evening.  We've been tight ever since.

Until next time..
ThatRunninGuy
++++++
Follow me on Facebook at Run for Heart.  Race for 2012: Reggae Marathon, December 1.
at October 09, 2012 No comments:
Email ThisBlogThis!Share to TwitterShare to FacebookShare to Pinterest
Labels: Living, Running

A teaspoon of ... Calcium ... helps the bones get stronger 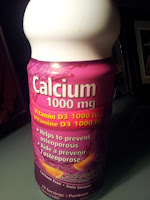 Was that too strong?

Maybe it's a result of growing up in the heat of Jamaica and being given 'warm milk' as a beverage at lunch and not finding that very appealing at all.

Or maybe it was an early connection to the Coca Cola that I got from the vending machine at my Dad's Texaco Gas Station when I went to 'work' with him.  Yes I was only 8 years old but no it wasn't child labour.  I got to work in the grease pit with the mechanics and spent my days getting thoroughly covered in dirt and grease.  Loved it.  Now I know why he kept the plastic covers on the car seats.

I really don't enjoy a 'cold glass of milk' at all.  The closest I ever came was when they loaded it up with condensed milk to 'sweeten it up'.  Now there was something I could enjoy.

So now that the doctor has told me I have a tendency toward 'brittle bones' I've embraced the calcium supplement.  And this stuff actually tastes good.  It comes with it's own dispenser so every morning before the first cup of coffee I toss back my Calcium along with my multivitamin.

So now I'm 3 weeks into recovery with 3 weeks to go until I can remove the foot cast for good.  I can hardly wait.  I'm still not sure how and when the first run will go but I am looking forward to it.  I'm getting tired of looking longingly at runners while I'm driving or walking (hobbling).  I want to scream out, "Hey...I'm a runner too!"

I'm staying focused on the 10K at the Reggae Marathon December 1.  Registration submitted, airline tickets booked, finalizing hotel. I plan to run.  I'll walk if I have to.  I WILL cross the finish line! And unlike the winner of the Indy 500 auto race, I will hoist a cold Red Stripe to celebrate.  Not milk!

Until next time..
ThatRunninGuy
++++++
Follow me on Facebook at Run for Heart.  Race for 2012: Reggae Marathon, December 1.
at October 02, 2012 No comments:
Email ThisBlogThis!Share to TwitterShare to FacebookShare to Pinterest
Labels: Running
Newer Posts Older Posts Home
Subscribe to: Posts (Atom)