I shaved my head bald? 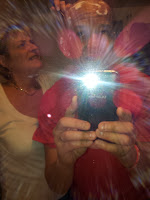 It was supposed to be a simple run for bragging rights the Reggae Runners Half Marathon Challenge.  At stake the ability to crow for a year that you were the fastest.  Reggae Marathon donated a pair of Puma Faas 500 running shoes and Red Line Laser Engraving donated a medal for the winner but at no time did I agree that I had to shave my head bald.

Well, the boys, Larry and Dan put the boots to me last Saturday the day before race day May 6 and informed me that 'no shave, no run'.

My wife Sally is a great person.  There we were on Saturday evening shaving my head.  Shaving cream in left hand, razor in right we went at it.  Two dull razors and lots of swear words later we were done.  Only one knick for which I was thankful for. Who says Saturday evening at our place is boring?

Bald.  Smooth.  Alien-like.  What was I thinking?

The pluses?  Only one:  my bald spot was gone.  The negative:  "holy crap, my ears stick out'!


The hair is coming back in quickly now.  Day 1 I was up to fine grit and after day 3 I'm at a medium grit.  If you need a quick sanding job, give me a call.  But hurry.  I'll be up to military crew cut by the weekend.

++++++
Follow me on Facebook at Run for Heart.  Races for 2012: Goodlife Fitness 1/2 Marathon, May 6, Scotiabank Toronto Waterfront 1/2 Marathon, October 14, Reggae Marathon, December 1
at May 10, 2012
Email ThisBlogThis!Share to TwitterShare to FacebookShare to Pinterest
Labels: Running