Running with the boys 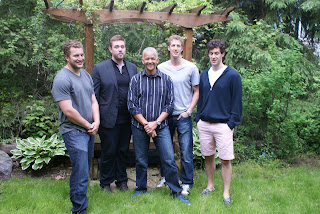 On October 16 I get to run with my boys.  Andrew and Court have both signed up to run the ½ marathon at the Scotiabank Toronto Waterfront Maraton.  Holden would have joined us but he is away tearing up the gridiron at Acadia University.  Next year, Holden.
My emotions are running high already thinking about the three of us running in the ½ marathon.  Since I had the opportunity of running the ½ marathon at the Reggae Marathon last year with Court, I have an inkling that this race on October 16 will be even better.
And race it will be.  Despite my best efforts to not ‘think competitively’, about running with 28 year olds, I’m betting that 25+ years of competitive experience will rule the day.  We all say that we are training hard but that’s likely just trash talk. Time will tell!  To be specific, around 10:55 am on Saturday morning, October 16.
Until next time…
ThatRunninGuy
PS:  I wrote this blog post at 35,000 feet on my flight home to Toronto after a week-long business trip in British Columbia.  Friday, September 23.  In mid-flight the significance of that date struck me:  it was the 3 year anniversary almost to the minute of my Father’s passing after suffering a massive and fatal heart attack.  I still miss him.  So while I’m running in the Scotiabank Toronto Waterfront ½ Marathon in his memory, I’m running to raise $2,000 for the Heart and Stroke Foundation of Ontario.  You can donate here:  Run for Heart.
at September 27, 2011
Email ThisBlogThis!Share to TwitterShare to FacebookShare to Pinterest
Labels: Running

'Old Volvos never die.  They Pass On' That headline from 1980 proves the adage that some things are timeless. Back then the world wa...