Running on the road in British Columbia 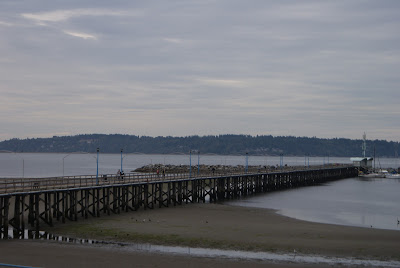 Running ‘on-the-road’ this past week was effortless.  And it brought back some great memories as I covered some old ground.
In a previous life I spent a ton of time travelling on business throughout Canada and the United States.  I always brought my running gear and fit in early morning runs every day before business meetings.  It balanced out the stress of travel and endless meetings.  It kept me sane.
British Columbia was a regular stop and I’ve had the chance to run in just about every major city and town.  This week I ran in Vancouver, White Rock and Kamloops.  Here are some random thoughts and observations:
Vancouver…well, Richmond near the airport actually.  My route from the Delta Vancouver Hotel takes me over the Sea Island Way bridge to #3 Road where I headed down into the commercial strip of Richmond.  Where did the Speedy Muffler King shop and the General Motors Regional office go?  Both were gone replaced by retail stores!  I had a great tempo run putting in multiple speed repeats.
White Rock.  I have tons of great memories of White Rock…all good.  My first experience was with the kids, Andrew and Courtney when we took them on a trip to BC.  That trip included a visit to Al and his family for a salmon BBQ in his backyard in White Rock.  We also had the chance to walk along the sea floor when the tide was out…the kids had a blast picking up all sorts of slimy things. Al and I had dinner this past week and realized that was over 20 years ago!  Time flies…  My run took in some of the ‘hills’ that White Rock is famous for.
Kamloops.  Four hours up the fantastically scenic Coquihalla Highway northeast from Vancouver is the high-planes city of Kamloops.  One of my first business trips was to open the Speedy Muffler King shop in Kamloops.  It is often windy in Kamloops and the highlight of that experience was hanging on to a helium-filled blimp that we used at the celebration.  No wind to worry about this past trip but the hills got my attention.  I got in a great run up the side of the mountain near my hotel:  upward pain rewarded with a sprint back down.
Packing up to grab the early morning flight back to Toronto was melancholic.  I wasn’t looking forward to the flight but was glad I got to cover some old ground on the road.
Until next time…
ThatRunninGuy
at September 23, 2011
Email ThisBlogThis!Share to TwitterShare to FacebookShare to Pinterest
Labels: Running