What a blast playing paintball while raising $'s for the CDA

To say we had 'a blast' on November 14 would be an understatement.
A small but determined group gathered at Wasaga Paintball last Saturday to play paintball and to raise money for the Canadian Diabetes Association.  We had a glorious day:  sunny with the temperature in the mid teens.
It was a weekend event:  a full afternoon of paintball followed by a banquet dinner at Beverly-on-Main and an 'afterparty' back at Saga Resort where the entire group stayed.  Sally and I didn't make the afterglow.  No, not because the young people tired out the 'old man'...I had a long run planned for Sunday morning and would not have been able to participate fully.
If only I had known what I was in for... 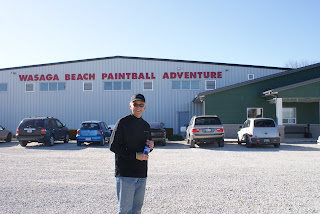 Thanks to the very generous donation from Strongbar Industries...love the top and hat, very 'slimming'...the entire weekend resulted in us raising over $1,100 for the CDA. Getting shot by the 'kids' was worth it!
This is a 'Before' picture...I have no idea what's coming. 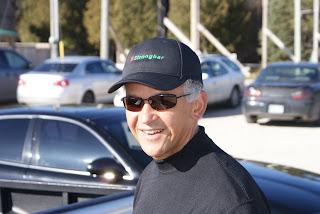 "Hey, is this really necessary?" 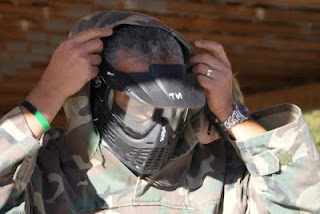 Absolutely it turns out. Wish I had worn some padding underneath. Wouldn't have stopped the 'sting' of being hit and put out of the game, but it would have reduced the welts: at least 20...I stopped counting.
Wasaga Paintball is NOT your average paintball experience.  They have over 70 acres of outdoor playing fields.  More than 12 different themed areas.  From the 'Wild West' (our favourite) to 'Black Hawk Down".  Running, shooting and tripping all part of the game. 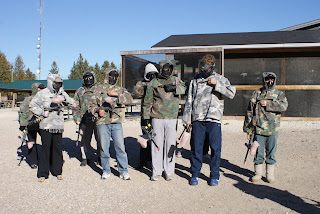 And with the gang all assembled, our safety briefing completed, and the adrenelin pumping, our referee for the day took out us out onto the playing field.
Four glorious hours of scampering up and down the rugged terrain, hiding behind tree stumps, defending our positions, attacking all the time.  Whew, what a workout! 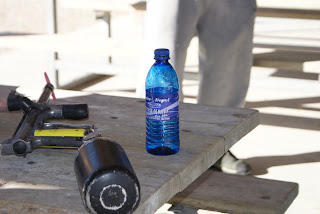 Break time!  Sweating bullets!  Needed to re-load the paint balls, charge up the CO2 in the markers and grab a drink.  Thanks to the local Water Depot in Wasaga Beach for the generous donation of water...don't know what we would have done without it.

No 'After' pictures thankfully.  That would not have been pretty.  Thanks Sally for the great pictures.

I learned a few things last Saturday:
More importantly I learned that young people care.  The guys and girls who took part gave up their weekend to help raise money for a cause.  I am proud of each of them for their support.  "I'll remember you at mile 25 of the Reggae Marathon on December 5"

Until next time...
at November 16, 2009
Email ThisBlogThis!Share to TwitterShare to FacebookShare to Pinterest
Labels: Living, Running