What is Canada's Premium Beer? 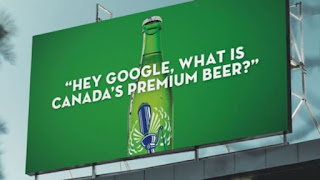 That question posed in backlit billboard splendor caught my attention while I was out running early one morning last week. Most of the time I am barely aware of anything other than my breathing and footsteps.  After seeing this message, all I thought about for the rest of my run was how smart Steam Whistle was in coming up with that campaign.

Advertising works when the message resonates with its target audience. This is great advertising! The people who put this campaign together deserve kudos for developing and executing this campaign. I'm sure they have data to rationalize their work but emotionally it just feels right.  And that's the magic that really caught my attention:  An advertising campaign that speaks directly to the customer emotionally.

Good going Steam Whistle...and all your marketing and advertising partners.