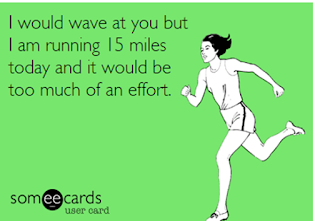 When you are out running do you wave at another runner?  That question crossed my mind recently. I was out for my regular early morning run and about half way through as I rounded a corner I noticed another runner heading toward me.  He was about my age and seemed to be running at about my pace.  I was on the right side of the sidewalk and he was on the left so there was no issue of collision.  As we got closer, I raised my hand in acknowledgement expecting a response.  He just ran by.  No acknowledgement...nothing.  I could have been a ghost.  And that got me thinking:  What's the appropriate way to acknowledge a fellow runner?  Wave or don't wave?

This may have been an isolated incident.  The vast majority of runners I encounter give some form of acknowledgement:  a wave, nod of the head or even a grunted 'Morning'.  It feels good to give the acknowledgement and even better to get it.  Kindred soles and all that.  When I didn't get a response, I felt snubbed.  Had I done something to offend him?

Maybe he was totally focused on some aspect of intense training.  I know when I'm running hill repeats I am absorbed by form and breathing.  While gasping for air toward the top of a hill I don't have the energy to wave.

Maybe I pissed him off with my speed and agility....nah, couldn't have been that.

This was probably that one in a million runner who prefers to stay totally in their zone while running. I understand that and respect him if that's the case.  It won't change my habit of waving to other runners though.  It makes me feel good.

at May 19, 2015
Email ThisBlogThis!Share to TwitterShare to FacebookShare to Pinterest
Labels: Running
Location: Toronto, ON, Canada