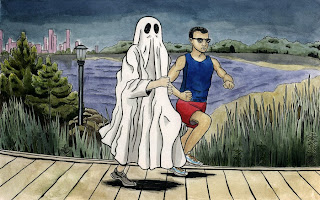 It happened again last weekend.  As I approached a runner, I raised my hand to acknowledge him and ... NO RESPONSE! What, am I a ghost?

I'm pretty sure that this guy was intimidated by my outfit and form.  Tights and functional top and nice pitter patter running style.  That's the only explanation for why he didn't respond to my wave.  Yes I sharpened up my poise and stopped heaving as I approached him to be more impressive but he was younger than me by 30+ years...How could he miss seeing me?

I must be the ghost runner.  Yes, that's it. Like the Emperor wearing invisible clothes, I'm invisible. To test that theory I'll trying running naked this weekend.  I'll wave and prance around at runners coming toward me and see if they wave back.  If I'm not nvisible I bet I'll only get a couple of hundred metres from home before I'm sitting in the back of a Police Squad Car butt naked trying to explain to the arresting Officer that I'm invisible.

at May 26, 2015
Email ThisBlogThis!Share to TwitterShare to FacebookShare to Pinterest
Labels: Running
Location: Toronto, ON, Canada