2012 New Year's Resolutions: all about the running! 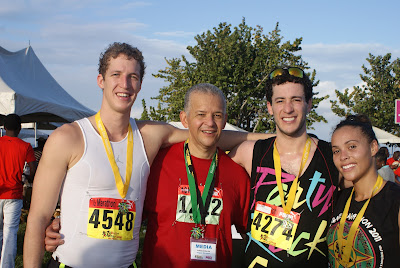 For the first time in all the years I've been running I feel like a 'runner'.  I know how that sounds given how much running I've done.  And like all good things, it took an injury in 2009 combined with a tough Reggae Marathon that December to force the change.

Looking forward to 2012 I mentioned to Sally on the weekend that I'm actually neutral toward the new year.  Most years I've written down resolutions and things I want to do and that's been great.  For this year though I didn't feel the need to start the year with a tight list.  I can hear my Dad's words ringing in my ear, "Planning?...I just go with the flow".  You know I'll never be able to truly embrace that fully but maybe, just maybe being more flexible will be a good thing.  So for 2012, it's all about the running and some of the things I want to explore:
So that's it for 2012.  I figure that should be enough to keep me busy.
Until next time...
ThatRunninGuy
at January 03, 2012
Email ThisBlogThis!Share to TwitterShare to FacebookShare to Pinterest
Labels: Running