What I learned from my road trip to Montreal 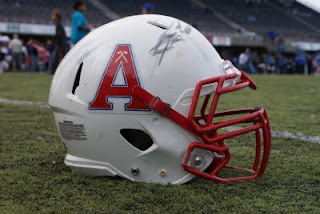 My son, Court and I went to Montreal last weekend to see my youngest son, Holden compete against the University of Montreal.

Holden is in his 4th year of playing football with the Acadia Axemen in Nova Scotia.

After graduating from high school, he got the football bug seriously when he played with the Mississauga Warriors. At the time when I asked him what he wanted to do after that he did not hesitate in his response: "I want to play football at university, Dad". He wanted that more than 'breathing'. He has been single-minded since and plays hard. Goal setting and achievement at its finest!

Since I can't get to his games in Nova Scotia, the chance to see him in Montreal was irresistible. I follow him on-line here http://www.acadiau.ca/sports/football/index.html 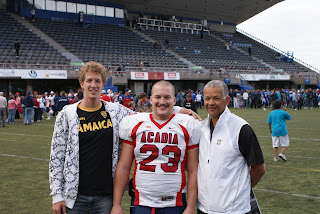 While the Axemen lost, Holden had the biggest grin on his face when we caught up with after the game.

Check out the picture. Now you know why I am a runner.

Holden is built like a truck and can run through a brick wall. And I have learned what 'quickness' is: Zero to full speed in 2 steps. The Defensive Ends have no chance when he is on the field. And he was just having fun.

Some other random learning from the weekend:

Life is funny. As a parent we hope we teach our children to be responsible, respectable and good. And then you have an experience like I did this past weekend where I learned from the kids: play hard, have fun, smile a lot. Go figure.

at September 28, 2009
Email ThisBlogThis!Share to TwitterShare to FacebookShare to Pinterest
Labels: Living, Running