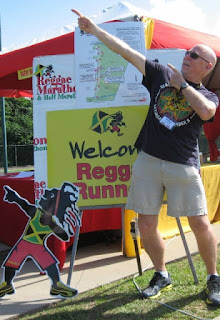 My name is Chris Morales.  I'm the Social Media guy for Reggae Marathon and I met Dan 9 years ago on Facebook when he posted a photograph of himself and Judi standing in the shallow surf on the beach in Negril.  I was mesmerized!  Negril was and is one of my favourite places.  I grew up in Jamaica and that photo looked like it had been taken in a location in Negril that my family and I picnicked at regularly.  As the Social Media guy, I reached out to Dan with a couple of questions.

Over the course of the next few months as we continued talking online, Dan revealed that one of his dreams was to run the full marathon at Reggae Marathon.  He and Judi traveled to Jamaica and we agreed to meet up after he had finished the race.  As things often happen, that did not work out exactly as Dan had planned.

Through a series of challenges that race morning Dan made it to the start line over 2 hours late.  Way too late to finish the full marathon within the cutoff time.  Disaster!

Dan turned that setback into a triumph in a way that illustrates his positive, always-looking-for solutions personality:  Dan spoke with the the race organizers and they agreed to let him run the 10K so that he could race...and of course get his Finisher Medal!

When we spoke afterward, I was struck by how effortlessly he told this story.  No dramatics, just matter-of-fact.  We became friends.

Every year since then Dan and I would spend endless hours chatting on Facebook plotting our return to Negril to meet up at Reggae Marathon.  Dan could talk!  He also loved to write.  Every once in a while I had to remind him that I had a full time job and that he had to get back to his Strata and acting business.  And while we talked about running, we segued seamlessly into work, friends and family.  Especially Family.

I can't express to you in mere words just how much and how deeply Dan cared about all of his family:  Judi, Cam, Janna, Danielle, Charlie and Jonah!

In Negril, Dan and I found our happy place.  A small, family run hotel right on the beach.  Dan and I have understanding wives.  Thank you Judi and my wife Sally for giving us permission to travel solo to Jamaica to run a race!

For the past 8 years we followed the same routine:  Arrival at the airport, shuttle to our hotel, dinner and breakfast at the beach-side restaurant, hours and hours swimming and sunning.  And talking.  It never got tired.

Dan had a knack for attracting good people.  This was so evident in Jamaica.  He effortlessly started conversations with people wherever and whenever he could.  As we know he was never at a loss for words. 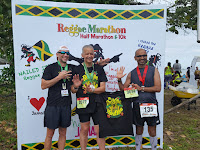 Very specifically, Dan connected four guys.  Larry in New York, Navin from Toronto and myself in Toronto.  We morphed into the '4 Amigos'.  We trash talked all year and met up every December to run at Reggae Marathon.  The highlight was the group photo we took after each of us had finished our running event.  Dan, the 4 Amigos will never disband! 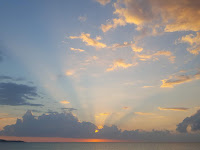 Last December on our first night in Negril, Dan and I were standing on the beach staring at an absolutely amazing sunset.  Negril has some pretty ideal conditions for sunsets and Dan and I had seen more than our fair share.  But this one was truly spectacular!  We stood there for more than a few minutes minutes taking it in.  Taking pictures and chatting giddily like a couple of kids.  That's a sunset that will live with me forever.


Thank you for posting that photograph of you and Judi on the beach in Negril 9 years ago.  Thank you for the privilege of joining your for that final run.