Running, running and more running in 2012 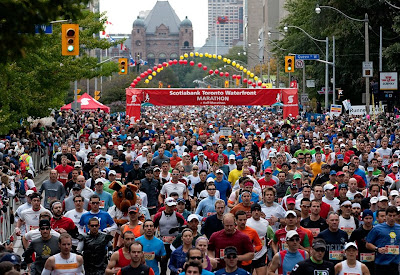 The Scotiabank Toronto Marathon and 1/2 Marathon was the largest race I've run in.  With the 'thousands' of runners I was always running in a crowd.  And it wasn't the runners in the race:  it seemed as if the entire route was crowded with spectators.  It sure was that way as we turned up Bay Street toward the finish line.  The noise of the spectators who packed both sides of the road all the way to the finish powering us on was thrilling.  I won't forget that any time soon.

This year I'm running 3 fund raising races for the Heart & Stroke Foundation of Ontario.  The first up is the GoodLife Fitness 1/2 Marathon on May 6.  I love this race.  After the the major up hill just after the 5 km mark up Hoggs Hollow, the rest of the route is downhill.  Straight down Yonge Street in Toronto for much of the route.  That's really fun.

Then on October 14 it's back for the Scotiabank Toronto Waterfront 1/2 Marathon.  By then I'll have a lot of summer running behind me and am looking for an under 2 hour result.  That should be possible as long I stay healthy...and off the salty snacks.

Then to wrap up the racing and fund raising year, it's my 4th time at Reggae Marathon in Negril, Jamaica December 1.  That's always a special race and a great way to celebrate the end of a year.

Look out for me in central Etobicoke this year running along the Humber River in my Pumas.