How I got through the Reggae Marathon...Behind the scenes

I ran it alone but it took an army to get me there. 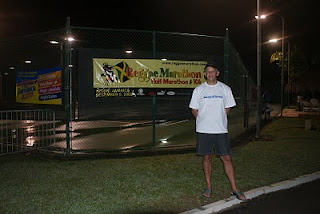 Lets start with the obvious.  Leaning to run.  Again.
Although I have been running for nearly 30 years and have competed in numerous 10 K and Triathlon events, finishing a marathon has eluded me.  Joining the Wasaga Beach Road Runners was the first 'best' decision.  Mike, Eric and the entire gang kept me running week after week.  Especially for the long runs.  They suggested using the run/walk technique (I went with 8 minutes run and 1 minute walk) and told me to respect the heat.  Really good advice that last one with the +42 degree Celsius conditions. 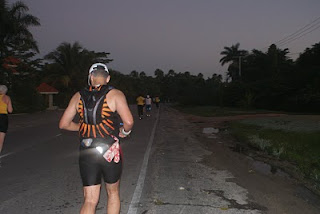 Sally met at mile 5 as the sun was coming up.  What a treat.  She has been with me every step of the way.  And she deserves a medal for the scare I gave her 3 weeks before we left for Jamaica.  Severe leg cramps and uncontrollable whole-body shivering after screwing up a long run.  Turns out I overdid it on the 'hot weather' electrolyte fluids during the run.  Seems you actually need plain old-fashioned water as well as salts.  Duh.  Thankfully no lasting physical effects.  And I did reassure her that it was better this happened at home rather than Jamaica.  She was not amused.
During training and especially after the race, my recovery was aided by Monique at Juice Plus.  The daily regime of vegetables and fruits put anti-oxidants into my system.  Significantly reduced muscle fatigue and recovery.  It works.  Felt good during the entire 26 miles and finished strong.
"Dr. Greg" Cholewinsky of McNabb Health Centre in Collingwood .  Magician.  His treatments solved the mystery of the painful left knee.  Turns out my hips were out of alignment.  Once he corrected the problem, the pain went away.  Ran pain-free for the entire race. 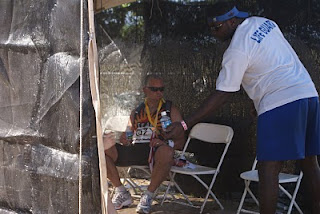 Hydration and hypnosis.
Hydration.  I carried my own water in a Camelback as well as a water bottle.  Got them along with all my other gear from The Running Room.  And grabbed water and Gatorade at every one of the 26 stations.  +10 liters of fluid consumed during the 5 and 1/2 hours.  Not including the water I used to drench myself at every stop.  My shoes were soaked the entire race!  Kept me cool and sweating.  And there are no words to describe the feeling of being repeatedly drenched with ice cold water shortly after finishing!
Hypnosis.  I had a number of sessions with Christine in the months leading up to the race.  Focused on staying focused...and breathing.  This was crucial once we passed the 1/2 marathon turn and I entered unknown territory I used her suggested techniques to keep my breathing steady and my muscles relaxed.  Oh, and I also talked to myself.  A lot.  That's another story. 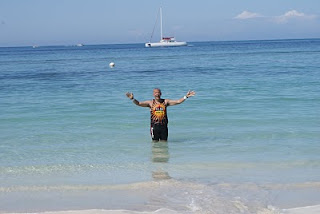 Cold and snowy now along Southern Georgian Bay.  Hot and sandy in Negril.  This picture keeps me going.
The last word goes to Tammy Gauthier of "And There You Glow Aesthetics" in Wasaga Beach gets the last word:  her pedicures solved the plantar fasciitis in my right foot.  Never had a pedicure in my life before that. I am hooked.
OK, I lied, the real last word goes to all of you who offered moral support and encouragement.  Especially the boys, Andrew, Courtney, Holden and Michael.  Thanks everyone.
Until next time...
at January 05, 2010
Email ThisBlogThis!Share to TwitterShare to FacebookShare to Pinterest
Labels: Living, Running